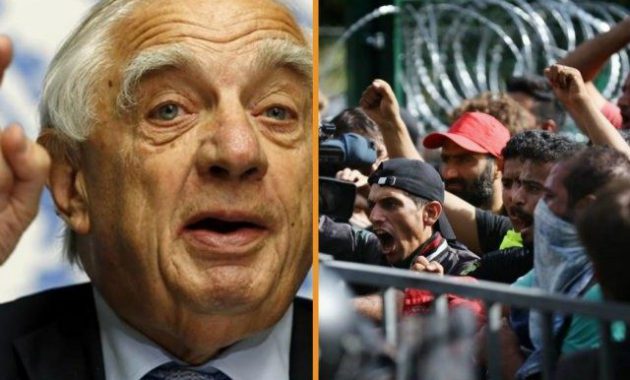 The European Union (EU) should “do its best to undermine” the “homogeneity” of its member states. That is the considered view of UN special representative, Peter Sutherland, who will be a star turn at an international migration conference in Istanbul, Turkey next month.

Mr Sutherland is non-executive chairman of Goldman Sachs International and a former chairman of oil giant BP. He will represent UN secretary-general Ban Ki-moon at the 8th meeting of the Global Forum on Migration and Development (GFMD) which brings together representatives of 160 nations to share policy ideas.

The special envoy is on the record as a man who looks at Europe’s centuries-old traditions of nation states and individual national characteristics as something to be despised. Not only that, he feels empowered to do something about it.

In 2012 Mr Sutherland was quizzed by the House of Lords EU home affairs sub-committee about what the EU should do about evidence from the Organisation for Economic Cooperation and Development (OECD) that employment rates among migrants were higher in the US and Australia than EU countries.

Mr Sutherland, who has attended meetings of The Bilderberg Group, told the committee: “The United States, or Australia and New Zealand, are migrant societies and therefore they accommodate more readily those from other backgrounds than we do ourselves, who still nurse a sense of our homogeneity and difference from others.

“And that’s precisely what the European Union, in my view, should be doing its best to undermine.”

The Civil Society sub-committee of the GFMD meeting in Istanbul has already been tasked with achieving that ambition. According to its published five-year plan, the committee will work towards enhancing migrant labour “mobility”, “migrants’ rights protection” and “regulation of migrant labour recruitment processes”.

Defusing “tensions between the Western and the Islamic worlds” is another key theme of GFMD while “eliminating hate speech” is also high on the agenda.

It would be easy to dismiss the GFMD as a spectacularly funded debating society with little prospect of influencing national policies but it does have the ear of the UN and is granted its own special envoy in the form of Mr Sutherland.

Given that Turkey now plays host to an estimated 2 million migrants en-route to new homes in Europe, courtesy of the illegal migration path across the Mediterranean and Angela Merkel’s offer of a home in Germany to anyone who turns up on that country’s border, don’t be surprised if some of the ideas discussed in Istanbul quickly turn up on the UN’s own agenda.

Doubtless Peter Sutherland will help see to that. The Dublin-born businessman strongly advocates liberal, open door immigration policies in general and mass immigration into the EU in particular.

As he made clear to the House of Lords, Mr Sutherland believes that migration is a “crucial dynamic for economic growth” and that this is the case “however difficult it may be to explain… to the citizens of those states”.

Angela Merkel couldn’t have put it any better herself.