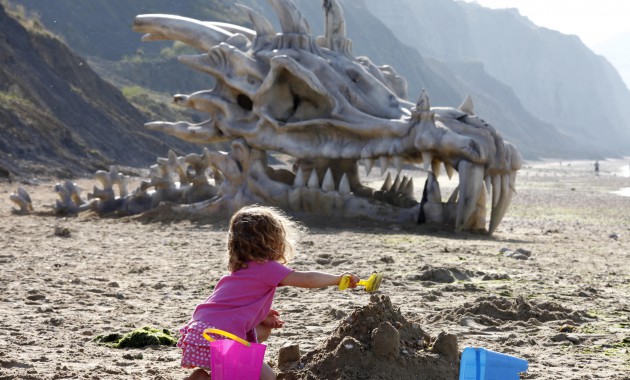 A 40 foot dragon skull was found on a Dorset beach as part of a campaign by Taylor Herring to announce the launch of Game of Thrones season three on TV streaming service Blinkbox.

It took a team of three sculptors over two months to design, construct and paint the skull, which is over nine foot tall.

The skull harks back to a scene in George RR Martin’s series where character Arya Stark discovers a dragon skull in the dungeons of King’s Landing, at a point when it is believed that dragons are long dead.

Ben Ayers from Blinkbox said: “Game of Thrones is easily the most talked about TV show of the moment. We wanted to mark its arrival on Blinkbox with a spectacle every bit as dramatic as this amazing series.

“We’re expecting this season to be hugely popular as the previous two series top the TV charts on Blinkbox every week and we have season three months before it will available on DVD or Blu-ray.”

Charmouth beach, where the dragon skull was found, is famous for its treasure trove of dinosaur fossils.

Happy vs. Unhappy Muslims
One location alleged to be Alexander's tomb ...like Amfipolis